Afternoon Game 5: In to the Forge

This is a sequel to "Fly you Fools!" based in Britannia for Roma Imperious. Summary with maps. AP Report.

As you return to the Villa Bato, amidst the ruin and destruction of the final Machina Draconis attack, a plebe from an out lying farm arrives. His name is Brom and he warns of a Giant raiding party that just destroyed his farm. This is most unusual since the Giants have lived in peace with the Villa Bato for over 50 years. Dectus Bato claims your original mandate is still in place and declares you must rid Bato of these beasts or face the wrath of the Empire. Despite the Herculean feat just accomplished, you see your duty and press on.

This will be my first run with Iridium V2 (although it has had a very thorough play test) and newcomers as well as Iridium veterans are all very welcome.

Titus grew up in Rome but his family heralded from Trans-alpine Gual. They were a wealthy patician family and still command

a great deal of respect. However, Titus the Elder, Titus? father, had disgraced the last Emperor by exposing his weakness in dealing with the Persians. For this, the Silanus family has paid a heavy price. Yet, their loyalty to the Empire is known far and wide.

Originally, Titus would have been slated for the position of a Tribune in a Legion. This did not suit Titus as he feels he should

have to make his own way and so he has. He quickly has risen to the rank of Optio of his cohort and has been chosen for this mission as being one of the most able to think on his feet. He takes the safety of the men under his command very seriously and will do his very best to see that they all make it through alive.

A student of history, Aulus never expected to find a talent for magic. Nonetheless, the Celer family is one of renown wealth

and position in Britannia. His father, Scribonius, was supportive in his sons efforts trusting to Aulus' elder brothers to carry the family fortune to new heights in their Silver works in Germania. While Aulus was still young, the Celer family was struck with disaster as the ship carrying the brothers was wrecked off the shore of Caledonia. Aulus and one of his elder brothers, Quintus the Younger, were washed up on a beach but lie in a coma for weeks. It was not until a Maguus from a nearby Roman fort came, cast his spells, were the boys healed.

It was not long after this that Aulus asked to attend the Scholae Magus at Eboracum. He studied magic and showed true

aptitude. His teachers always spoke well of him and it was not long before the Praetorians asked him to join them. He worked for the Empire for a short while but when faced with the duties of a Praetorian, in this case, destroying a seditious library, he was repulsed and left their order.

Now, he works for the Legions as an auxiliary, allowing himself the freedom to refuse a mission if it offends his sensibilities.

Also, it allows him to stay close to Lepida, his wife and lover for the past five years. She is the model of Roman refinement and always discrete. She is pregnant with their first child and stays in their home in Eboracum.

From an early age, Cammius was an adventuresome sort. He grew up just outside of Lundinum on a small private villa. His

mother was never wed and it was generally known that the equestrian lord, Camurius Verus, was his father. However, this was not spoken of and his mother, Virella, lived a happy and comfortable life until Cammius was thirteen. It was in the summer of that year when a small plague struck the outlying villa and many grew ill and died. Virella was one of them but on her death bed she made him promise to always do his best and live beyond the villa.

Camerius, his unacknowledged father, helped Cammius enter the scholae and receive training as a medicus. He dedicated

himself to learning all he could of disease, wounds and healing. When he had the confidence of his mentors, he took a post in the Legions as a medicus. He has seen the world as his mother wished and returned to Britannia. He now hopes to make a difference in his home land.

Viritrixa grew up outside of Lundinium as a daughter amongst many children. Her father did not know her from his other children and

Viritrixa was more raised by her mother and the rest of the villa than by any one person. This gave her a strong connection in the small villa of Aprilis. As she grew she became tall and strong like her father which was a boon to helping in the daily tasks but a curse for the Legionary recruiter.

When they came by she was taken to be trained in the legionaries. Viritrixa took up the axe to honor her family as it is the

weapon of her ancestors. It was thought she would not survive long enough to matter so it was overlooked. To everyone's surprise, Viritrixa not only survived but flourished. She became a demon on the field but never accepted any promotions.

Currently, she is assigned to Titus, the Optio of her cohort. Viritrixa sends any gold she can loot back to Aprilis and her mother for

dispensation to the villa. This has helped even more than Viritrixa realizes. She will not fail them.

Vingo grew up in the Pictish kingdom, the fourth son of the local King Ebron the Red. The druids had always noted how quick

a study Vingo was, most unlike his brothers who only wished to fight, drink and wench. Vingo wanted this as well but refused to bow to his brothers or trade on his father's name. At the age of twelve Vingo went to the Isle of Morna to study the ways of the Vates, a bard. It was only a few short years after that when the master druid Fial adopted him as an apprentice.

It would be two decades before he would become a full druid with all the responsibilities but the time came. When he left

master Fial, he knew it would be a long journey to find a tribe that would need his guidance. He felt the calling of the gods and it drew him all over Britannia doing their will. Now, it has taken him to the Villa Bato. Vingo follows Lugh and allows His Light to guide him.

As a Druid trained by the Morna, Vingo has power over Fairies, Illusion and Scrying.

It is rare that dragons attack in Dumonii but one night that is exactly what happened. Llew was but a boy of five winters when

his father heard noises coming from the cot. He went out while the family held its breath expecting thieves but when the spurt of flame and the might roar took their father from this world, they could only try to run and hide. His mother knew they had little chance and her eight children only had one chance, to hide while she lured the beast away. She had no hope to escape but only to buy her children the time to survive. She ran screaming into the night and those screams were cut short too quickly.

Llew remembered his older sister who always made all things right. She was crying that night and it made Llew cry. She told

him to be quiet and hide in his secret place. She was going to see to the others. That was the last he ever saw of her. In his spot under the floor boards of the kitchen, he could hear what sounded like the crunching of chicken bones. Later, when he grew up some, he would know the sound for what it was. Whether it was the gods or the luck of the draw but only Llew survived that night.

He would go on to be raised by his uncle, a Roman Aedile in Eboracum. It would be through Aeternius Gallus that Llew would

gain entry to the Scholae and later the Draconis Ordo. He would become a Dragon Hunter. Since the day he took the oath, he has pursued and destroyed dragons where ever he has found them. Today is no different. 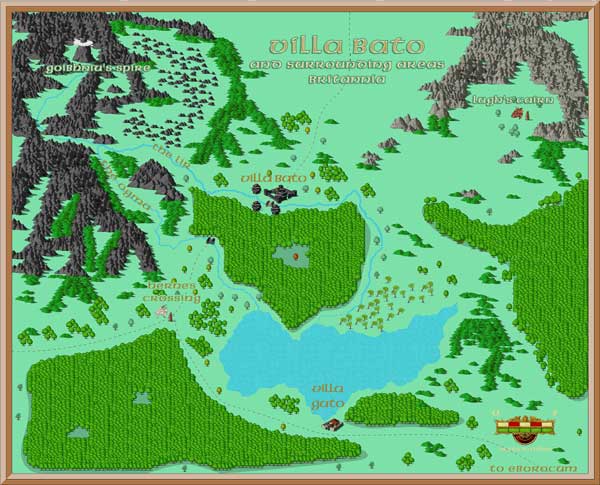